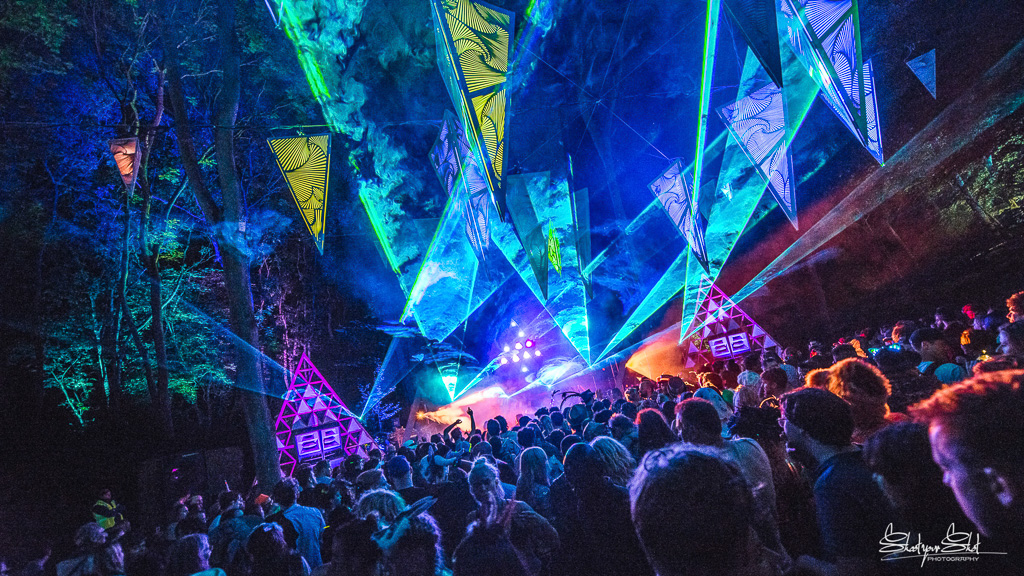 Noisily is built upon a core foundation of values and an interminable ethos which outlines the way we want the festival to positively affect all those involved. From the litter pickers and chippies, through artist liaison and boutique camping suppliers, all the way to the management and guests, the evolution of Noisily revolves around these ideals – friendship, love, passion, nature, equality and community. Just last week we shared our Looking After the Woods initiative in one of our Noise Pieces, detailing our efforts and goals when it comes to keeping the festival sustainable, reducing our carbon footprint and offsetting it where possible. A cornerstone of this which also ties into our art, is the continual evolution of our stages over the years.

One aspect of being a small festival with extremely high production values, in the need to create the spectacular with a very small budget. This is why instead of building all new stages each year, we operate within our means and environment, whilst protecting the latter via the medium of recycling, and add to their original, mesmeric designs.

This continual reinvention installs a shape shifting familiarity in the festival, inviting those Noisily stalwarts of yesteryear to enjoy the growth of the event and the finer details of the art, and the newcomers to soak up their original experience. Four years ago we found, totally by chance, a carpenter called Richard Woods (seriously). Co-founder Lachie had created a very rudimentary drawing on Sketch Up of the Noisily triangle, and handed it to Richard when he arrived on site, asking, simply, can you build that. Woodsy replied with a resounding yes, and set to work with the help of his right hand man Steve, and a troupe of workers. Within a few days the Noisily stage was up, and with the help of some epic lasers and pyrotechnics, we were out the blocks and en route to Techno Moksha! Since that first edition the stage has become a beacon as flagship of the festival, and stands proud alongside the Liquid Stage and Treehouse as one of the three pillars of Noisily. Last year saw the introduction of the suspended aerial triangles, laser cut by Michelle Townsend and displayed the year before on the hill by the cocktail bar. Although this time they were rigged with several thousand LED strips inside and controlled from our front of house position by Lucy Irving and Tom Shey, the brains behind the epic Noise Alley stage we built at the Oregon Eclipse last summer. Laser support came from the Adam Norton who has been with us since 2013, whilst the lighting and pyrotechnics was curated by our man on the ground, Doug Coppell. A special mention, as ever, because she’s so darn special, goes to Ruth Herbert, our Director of Art who oversees the development and design of every single piece of art on site, including our stages.

We spend the whole year Building the Noisily Stage, and the artists who play on it are one of the key pieces too, and this year we’re going harder and deeper than before. So check out our line up here and dust off your dancing booties. Summer is here and the Techno is coming!