Home » Latest Noise » 2. Music » Diversity on the Dancefloors: The Noisily 2018 Line Up and launch of The Leisure Centre

Diversity on the Dancefloors: The Noisily 2018 Line Up and launch of The Leisure Centre 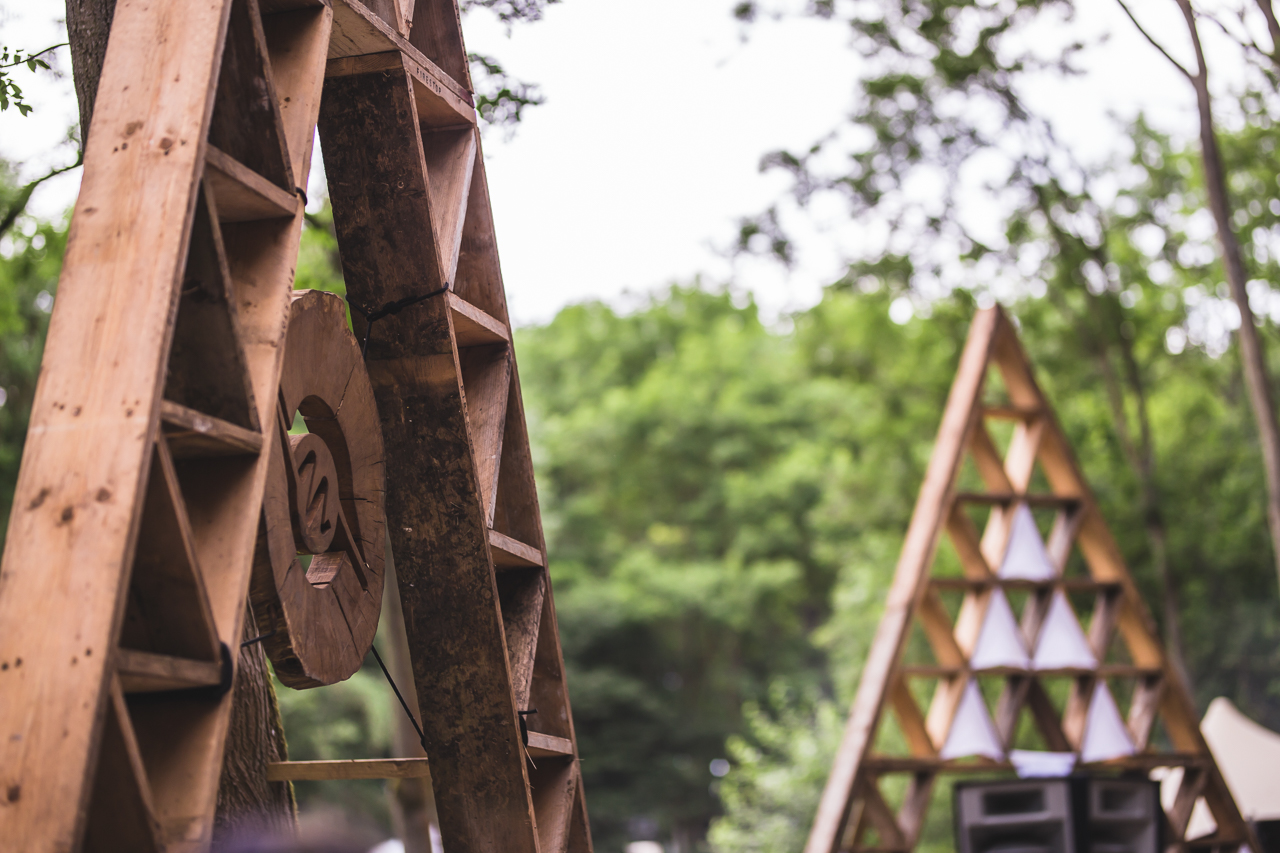 Did you know that the negative space inside an atom is around 99.99%, and as a result almost all matter in the universe is essentially a hologram or illusion. The only reason we can perceive things, or even people as objects, is because the electrons flying around the nucleus create vibrations which we can see. A little like when you look at a fan moving really fast and it appears as one solid disk rather than a collection of blades.

An atom is like a mini solar system, the nucleus being the sun, and the electrons around it the planets. From the largest galaxies to the smallest single celled organisms living inside you right now, we are all vibrating together in unison to create the frequency of life. The uni-verse.

Did you also know that when we listen to music our brain waves change and adjust our breathing and heartbeat to the rhythm of the tune? It’s a chemical reaction, and music or rather sound spikes our dopamine and serotonin levels, carrying us to altered states of consciousness. We’ve all been lost in music on a dance floor, swept away by the tune, absorbed in the breakdown and elevated by the drop. Basslines, like tribal drum circles, put us in a state of trance, and when we’re programming our stages at Noisily we think of the uni-verse of sound we want to create for each energetic mood at the festival, catering for the rise and fall of emotions, mood and energy of everyone there.

The diversity in music across our stages means that there really is something for everyone, and below, as selected by the whole team at Noisily, are a few of the highlights from each of our main stages and the exciting launch of The Leisure Centre’s 2018 lineup.

Boss Axis – A German duo known as the “ministers of melody”, Boss Axis have been producing beautiful melodic Techno for several years, and are part of the Parquet Recordings family headed up by Solee (Noisily 2016, Noisily 2018). The 100th release on the label was their collaboration Still Here, which is still one of our favourite tunes of all time. If you’re a fan of extremely uplifting Techno, then look no further, you don’t want to miss these guys.

Khainz – Many years ago Simon produced Psy Trance under the name Freakulizer. From there he moved into incredible Progressive Psychedelic Techno with release such as 70,000, Mr Mystery and Shift Cycle. Now, a decade after we first saw him play on the Liquid Stage when it was at Glade, he joins us at Noisily to play his cutting edge “Proper Techno”. There is a serious groove to his basslines, along with an energy that will carry us through into the nighttime hours at Noisily 2018.

Louie Cut – The linear nature and general chunk of Cut’s production echoes the earlier work of Stein and Ruiz, whilst his partnership with Avrosse, also playing on the Noisily Stage this year, has produced some biblical work. This is undeniable bass face music, and will have your feet and the legs attached to them thrusting in all directions as the sawtooth and square waves so synonymous with his sound rinse the dance floor. One for late night lunging.

Hatzler – You know when someone says, “oh, that’s proper German” when referring to Techno? Well that’s Hatzler. As well as his own extensive catalogue of originals, he’s remixed tracks for industry legends such as Oliver Huntemann and Oliver Koletzki (Noisily 2018), and the track Iyewaye by the second of the two Olivers is an absolute belting track. You can catch Hatzler late night on the Noisily Stage.

Audio Anonymous – Noisily Director and Liquid Records founder James and his production partner Ken, are famously known as Bass duo Atomic Drop. Alongside Noisily co-founder Charles, they are the only act to play at every single event since we opened our gates in 2012. But beyond that interesting fact, last year they began making Techno together. In a short space of time they were releasing on Iboga Records, and have got productions lined up for major labels in Europe. Think deep, melodic, with a healthy slice of nice.

Flip Flop – Ten years ago Chris and John were one of the biggest names in Psy Trance under their alias Flip Flop. Their album Floppy Drive earned them international acclaim and headline sets at the world’s flagship Psychedelic festivals, playing alongside heavyweights such as Tristan, Dick Trevor, Headroom and Ace Ventura. After a long hiatus which has seen John achieve success working alongside Pete Tong and Brian Ferry, and as a Deep House and Techno producer on Anjuna Deep; and Chris working on a number of other professional avenues including the wine business and as a chef, they are back! Yes, Flip Flop are returning to Noisily with a collection of new material, and we’ve heard some of it. It’s really very good!

Breger – Deep, dark, slow, psychedelic, and really, really trippy, Breger popped up on our radar a couple of years ago and we’ve been looking to book him ever since. His style is best described as Psychedelic Techno, yet at the same time there’s no pigeon holing his productions as they vary so much. At Noisily he’s one to watch without fail, and an excellent excuse to visit the Liquid Stage if you want to check it out but aren’t inclined to the faster end of Trance.

Fagins Reject – A far cry from the slower grooves of Breger, Phil Getty makes funky full power Forest Trance under the alias of Fagins Reject. With roots in the psychedelic rock world, and a career as a funk DJ and bassist, Phil found Goa Trance in 1992, although it wasn’t until 2008 that he began releasing and playing under his current mantle. He’ll be playing very late or very early at Noisily, depending on how you look at it.

Egorythmia – Psy Trance and Macedonia aren’t necessarily two things one thinks of together. A country usually associated with Eastern European culture, beautiful scenery, and a rich history dating back thousands of years, it’s also the proud producer of Egorythmia. A brilliant Progressive Trance artist, alongside Symbolic (Noisily 2018) he is one of the absolute must see artists for those who love Prog.

Altered State – Aside from looking uncannily like Jonah Hill after he lost all the weight, Altered State is at the forefront of the Irish Psy Trance scene, as well as being the newly appointed head of A&R for Australian Psychedelic label Critical Overload. Overseeing artist development and talent scouting means he has an ear for new music and penchant for exploration. His set at Noisily this year will be one of the highlights for those of you on the Liquid Stage.

Nimbus – With new releases on Liquid Records out ahead of the festival, and a back catalogue of squelch which could fill multiple slots on the stage, Jae Nimbus will be taking to The Treehouse with an all new live set to feast your ears on. Fusing Glitch, Dub and Bass, his music is interesting, really bloody interesting. At the same time there is a fresh familiarity in the sound, reassuringly non-dissonant, rhythmic, and wibbly.

Slamboree Soundsystem – Every set they play is live, original, exhilarating, full power, overtly fun and down right fantastic. Slamboree know how to perform, and if you’re looking for something beyond the tempered knob twiddling of your favourite DJ, then this is the group for you. Without a doubt one of the highlights programmed for the weekend this year!

Stanton Warriors – Still going. Still got it. The Stanton Warriors love what they do, and they have a lot of fun while they’re doing it. Noisily co-founder Charles (me who’s writing this) recently saw them play in Canada, and at the end of the show Dom was waiting by the door thanking people as they left, whilst having a cheeky fag. All part of the service apparently!

Roni Size – Size matters. The New Forms 20 year anniversary tour is coming to Coney Woods, as Roni treats us to an epic set of the seminal classic. Alongside Logistics (Noisily 2018) and LTJ Bukem (Noisily 2017) we can’t think of anyone in the DnB scene we’ve listened too more. Hmmm, maybe next year we book High Contrast and Dillinja….? We digress. Check out Roni Size at Noisily, you won’t be disappointed!

Joe Ford – Hailing from Harrogate, we have a feeling Joe Ford didn’t spend his formative years hanging out in Betty’s Tea Room! After playing Noisily 2015 we knew we’d be welcoming him back through the gates into the hallowed grounds of Coney Woods before long. The Shogun Audio artist is one to see up at the Treehouse this year if you like high energy DnB.

The Leisure Centre came back for its second year in the woods in 2017, instigating an apocalyptic thrustathon the likes of which we’ve never seen. Smoke hung heavy in the air as aggressive basslines ripped through the haze, deflecting off the projections like the meeting of two Valerian Steel swords in battle! This was the belly of the beast, the brutal undercarriage of an otherwise unassuming soundtrack, sucking punters in like moths to a flame, before dispatching of them with a pure disregard for anything at all. Sounds epic right!?

Without further ado, we are excited to give to you, the full line up for 2018’s reincarnation of the dirtiest stage on site. The Leisure Centre.