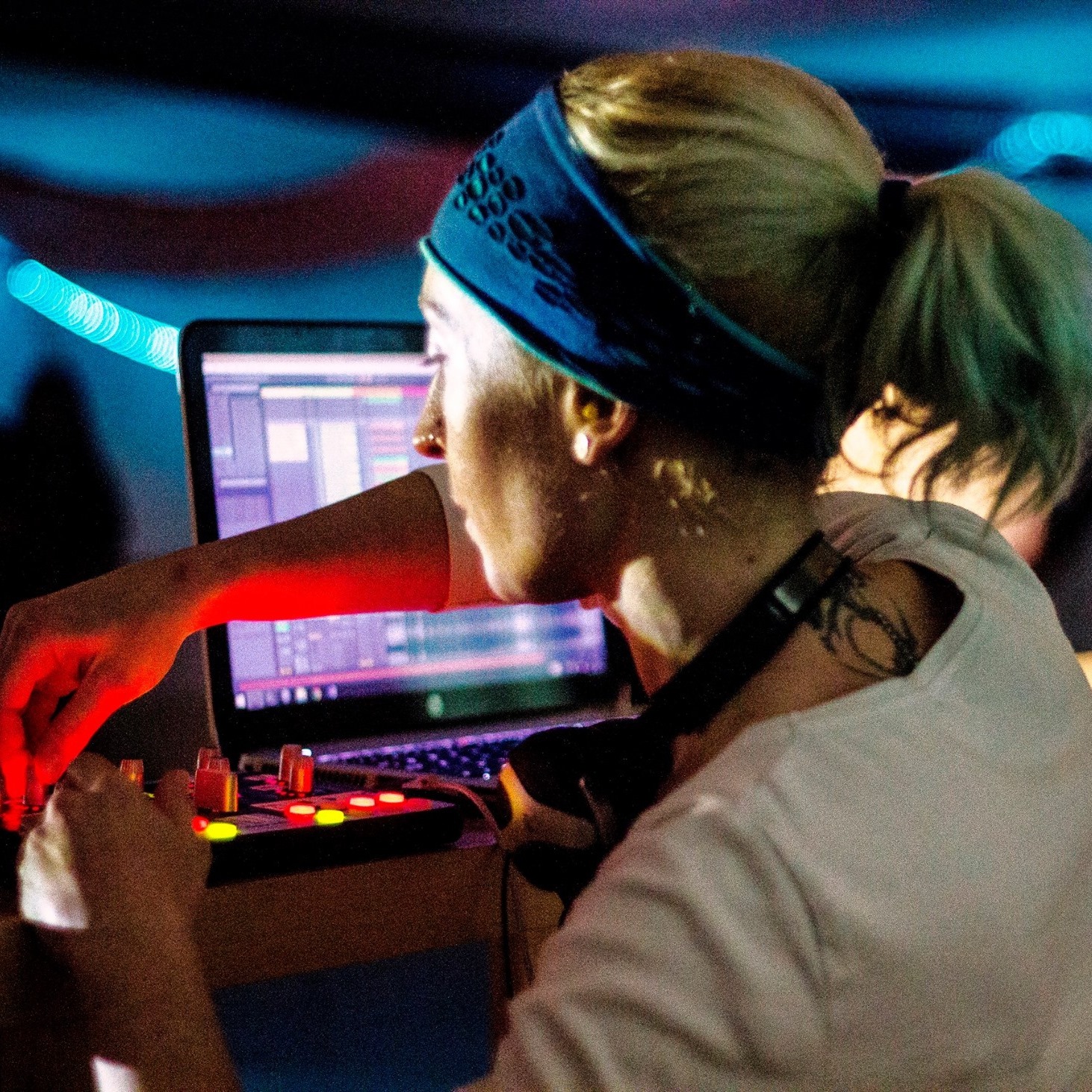 Today is International Women’s Day, a time to highlight ongoing gender inequality in all of its forms, as well as an opportunity to acknowledge the ways in which this inequality is being recognised and resisted. This year, the theme of the IWD campaign is #BalanceforBetter, with a focus on raising awareness of gender bias and forging a more gender-balanced world.

Within electronic music culture, the issue of persistently male-dominated lineups at music festivals has been much discussed over the last few years, with many festivals pledging to reach a 50/50 split by 2022. Meanwhile, organisations like WXMB 2 are working hard to promote the work of electronic music artists whose gender tends to leave them on the sidelines.

Last year, when the issue of gender imbalance on its 2018 lineup was raised, Noisily responded with an article on its website acknowledging this and committing to improving the ratio for 2019. This year, there are several artists who identify as women on the festival’s lineups for its three main stages, and seven are booked for new stage The Nook (out of a current total of seventeen). More are due to be announced when the lineups for its other stages are released, including a return of last year’s WXMB 2 takeover of the Parliament of Funk stage.

I spoke with Charles Cannon-Audley, co-founder and content creator at Noisily, about how the festival has gone about honouring its commitment to fostering more gender equality in its music programming since last summer.

MS: It’s great to see more women on this year’s lineup! What strategies did you use to achieve this improvement?

CCA: I’m not sure if it was so much of a strategy, as just an excuse (as if we needed one, haha) to dive into searching for new talent. As the festival has grown the roles of the team have become more streamlined, so where before we all played a fairly instrumental part in the programming, our responsibilities have become more streamlined and we don’t have as many cooks in the line up field.

With that in mind we all put aside time for our own research into new artists across the board, and were encouraged to see that since our inaugural festival in 2012 there are considerable more female producers and DJ’s in the industry, albeit still dramatically fewer than men.

At Noisily we do not believe the programming of female artists should be of separate concern to that of male, and that just because there are fewer female artists vying for work that their music should be viewed in a different way. We’ve made it clear that there is a line between good music and bad music, irrespective of genre and who produced it.

MS: It’s interesting that this is a point that often has to be raised by those making a commitment to improving gender balance, in response to those who feel that a focus on booking artists who identify as women equates to a compromise on quality. This is an attitude that flourishes when the uneven nature of the playing field is denied, and/or on some level men are conscious of what they see as an erosion of their privilege.

The key positive I see here is that Noisily has acknowledged that DJs and producers who identify as women are creating their careers from positions of structural disadvantage, and has devoted more of its resources to minimising the effects of this as far as they can within the context of the festival lineup, without compromising on quality. The decision to seek out relatively unknown artists who identify as women only strengthens Noisily’s role as a key tastemaker in underground EDM culture in the UK.

CCA: I wholeheartedly agree, and it makes my skin crawl when I overhear the Old School making comments like this. Fortunately they seem to be getting fewer and further between.

MS: Did you come across any particular challenges in your efforts to book more artists who identify as women?

CCA: Our main issue on the Noisily Stage has been in booking headline female artists, and this is actually part of the reason the top end of our 2018 lineup was dominated by men, for the simple reason headline female acts charge more than their male counterparts. From our research and experience of programming it seems that as there are fewer female producers in House and Techno, and as a result those who “make it” do so faster and can charge more, or perhaps rather what they deserve, which is fantastic for them, but makes booking harder for a medium sized independent festival with limited budgets.

We expected that the Liquid Stage was going to be the problem child when it came to booking female artists, and particularly producers as opposed to DJ’s. So herein lies this issue, that there are very few female Psy Trance producers whose music fits the Liquid stage ethos. Psy Trance may well be one of last remaining counter cultures, and if we’re being honest is a bit of a boys club when it comes to the artists and producers in it.

As for the Treehouse Stage, bass music is the intermediary between the Psy Trance and Techno / House music scenes, and still has a low number of female producers next to male. I think we need to look at both genres and think how we can encourage more aspiring female producers to get making tracks, because if you look at the number of females to males at the festival drawn from our Christmas Survey – 51% men, 48% women, 1% non-binary – it makes sense that there should be equal numbers of producers from both genders when the playing field is level.

What we can do at Noisily it to create a space that promotes that level playing field, or is the playing field itself I suppose, wherein any producer feels empowered to get in the studio and make music.

MS: That’s a good way to put it, and so important as the playing field is anything but level in everyday society and culture, and that this is the context from within which women are having to create and establish themselves as artists. This includes, for example, the still widely common assumption that women will take on the bulk of domestic and child caring work, leaving them less time for creative pursuits and career development; the persistence of the pay gap, making expensive hobbies like music production less accessible; the funnelling of girls and boys into stereotypical gender roles; and the misogyny and objectification that continues to be reproduced in mainstream media and culture, which leads to assumptions that successful female producers/DJs are only successful because of their looks.

MS: Though the lineup is probably the most talked about aspect of gender imbalance in festival culture, the issue is woven through the whole festival experience. The way people who identify as women and as men are presented, visually and in text, is an important factor in developing a culture of equality and mutual respect. I’ve noticed, for example, that some of your promotional material features images of both male- and female-presenting dancers. Seemingly little things like this go a long way towards dismantling the implicit assumption that dancing is ‘women’s work’, and the related assumption that DJing is ‘men’s work’!

Also, when introducing female artists that you’ve booked, you don’t refer at all to their physical appearance, which is something that has tended to happen to women in this industry and strengthens the idea that they are successful because of their looks rather than their skills, experience and accomplishments.

Are these conscious decisions based on your developing knowledge of misogyny and sexism?

CCA: They are. We try and present our ethos and ideals subliminally as well as through written content and discussion. As humans, and especially as an organisation such as Noisily we are duty bound to help change people’s perceptions of gender, race, vulnerability, etc. You grow we grow, we grow you grow. The great privilege we have is that we have access to so many people, and we do consciously present all our content with these themes in mind. We do the same with the wording on our website, we hope to include it on the ground at the festival too, we are very conscious of it.

Having such a receptive crowd means that instead of changing one person’s mind, we shift the perceptions of many which has the potential to create a movement, and that is where powerful real change happens. Having spent a great deal of time trying to convince people of the correct ideals in long conversations over dinner, or wherever, it can sometimes feel a bit futile, a bit like banging your head into a wall. However sitting here, on my keyboard, and in the woods in July, we can reach so many more, and those people whom I’ve tried to drag kicking and screaming into our reality over dinner, are forced to open their eyes to see that the masses are in fact on board, and their fear of not belonging (because that is the root of it all I believe, and I’m writing a Noise Piece about this for release in the next couple of weeks) fades away as they realise that they are not alone, and it is ok.

MS: That’s a wonderful philosophy, and it’s been great to find out more about how you put it into practice – I agree that it’s often much easier and far-reaching to speak through one’s actions than to persuade through discussion and argument.

Finally, do you have any advice for festival-goers who want to do their bit to help dismantle misogyny and sexism and support the development of gender equality in festival culture?

CCA: Stand in your integrity, speak up to bullshit, even if / especially if it’s a throw away comment from a friend. Embrace the change. Love your neighbour. Love the stranger. We are all equal yet wonderfully beautiful in our individuality. Listen. Learn. Love.

Thanks to Charles for a great interview. For more information on International Women’s Day and the issue of gender balance, search #BalanceforBetter and add your voice to the discussion. For more news related to Noisily’s ongoing commitment to gender equality, watch this space!