With the Summer coming to the end we thought it would be a nice time to reminisce with a series of highlights from different elements of the festival, starting with the music! We asked various team members and this is what they came back with. Enjoy!

My musical highlights are less about individual acts and more the deliberately programmed sessions we had across the event this year featuring many of my favourite artists. Programming is what i get off on, so my highlights tend to be a series of artists of a certain style who combined to create a special journey on the various stages across Coney Woods.  Being a massive fan of crossover sounds between the trance, techno and psychedelic styles, it was with particular pleasure that the Zenon Session with Breger, Evil Oil Man and Grouch, worked so well on the Saturday on the Liquid Stage.

The Sunday session taking in Patrice Baumel into Noisily favourites D-Nox & Beckers with Oliver Koletzki closing was incredibly carefully thought about.  All these artists are psychedelic individuals and I’ve spent a lot of time with them on various dusty dance floors across the globe, so just knew that they were the right men for the job. It all brought a massive smile to my face! Nailed it.

My musical highlights at Noisily this year? That’s a tough one, clearly. However I always find it’s the ones you most expect, then the ones you don’t expect at all.

Oliver Koletzki was life changing. The perfect way to end the festival and a veritable Techno genius, there really is no one who has embodied the Noisily Stage sound that well in the 7 years we’ve been running.

Shawn the Prawn and Mike from the Dance Off played an absolute blinder on The Parliament of Funk, so damn funky!

Finally, my mate Giovanni from Mexico who I met in California last Summer out trimming. What a guy! Never has anyone emitted such positive vibes before, and his set on the Liquid Stage, on his first time in Europe was spectacular! He even came to Camden with me post event and got the Noisily logo tattooed on his arm. Fanboy for life!

Slamboree Sound System – Their live performance on the dance podium at the Treehouse Stage on Sunday was off the hook – such an amazing show, quality production and delivery.

Hatzler – His closing set on Friday night on the Noisily Stage was EPIC – his dirty and hard sounding techno was perfect for this time and the Noisily crowd of discerning techno ravers!

Allaby and Bedders – A quality set of techno infused progressive trance was a great transition into the psychedelic session that followed till the close of the stage at 4am – Deep, driving and full power sounds mixed with quality production… what more could you ask for.

My highlight was James’ set on Friday. Since meeting him back in 2013 as Atomic Drop I’ve watched his musical tastes and style change and evolve so much. Its really awesome turning round and being like omg who’s playing now, and then being told it’s one of your team, it’s incredible! Second highlight was then his robot turning up to stage!! What a wonderfully proud moment!

Always any set from James Monro! He is the master who has never played a bad tune in his life. Then also Oliver Koletski who closed in such and amazing way it gave me goosebumps, following onto the dropping of The Voice by John Farnham by Noisily (if not a touch too early).

I had been the last person to leave site in 2017 when that came on the radio, it made me feel like we had the voice to help people for the better with what we are doing. It made me feel incredibly happy to be able to play the song in such a powerful way to the whole festival this year, as it has a strong message that I believe is very relevant to what  Noisily believes in – standing up for what you believe in, making some noise and being who you are. 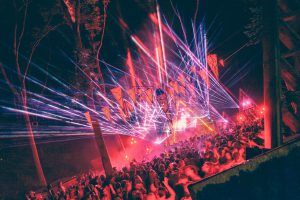 The first thing which springs to mind is Rinkadink’s unique hard hitting set on the liquid stage. There is something fantastically weird about that guys music, his unpredictable drum patterns keep you on your toes but still manage to maintain the unifying psytrance beat which everyone is on that stage for.

Then all Sunday afternoon on the Noisily stage, what an incredible progression of music! I even enjoyed myself a little bit too much and ended up having to be taken (carried) back to my tent early by my wife… missing the finale described above. Ahem…

A big highlight for me was Roni Size performing his age-old classic ‘Brown Paper Bag’ on the Treehouse Stage – the track that was claimed last month as one of  @BBC6Music’s ’30 tracks that shaped dance music over the last 30 years’. Witnessing a track so prestigious in dance history echoing through Coney Woods almost 20 years on from it’s original release sent goosebumps across myself and all the Noisily family around me, whilst the dancefloor heaved with bassy goodness.