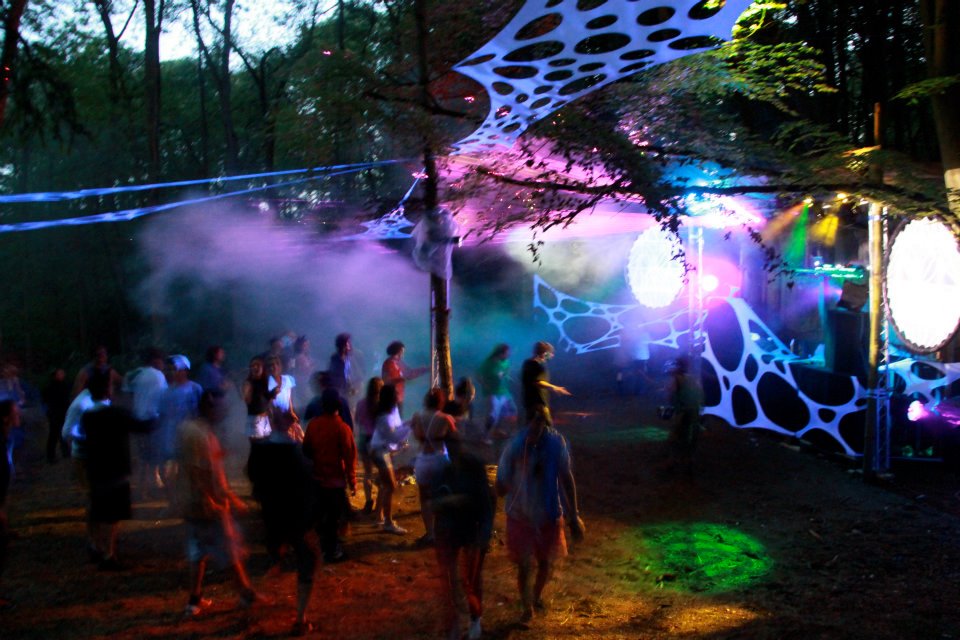 Quite often when festivals get into their flow and become established, it can seem as though that’s the way they’ve always been, so as we head full steam into our 9th Noisily, we’ve come over all nostalgic and wanted to share our own origins story.

For those relative newcomers to the Noisily family, it’s hard to imagine that in May 2012 when we opened our gates for the first time, a modest 450 people joined us amongst the trees of Coney Woods. The build crew, comprised of the 4 founders, their friend Jack the cameraman, and a few mates for the final push, worked their fingers to the bone getting everything ready.

The Noisily Stage was where the Liquid Stage sits now, and was outsourced to a production company who brought along an impressive yet entirely out of place structure which would’ve looked more at home at one of those one-day-festivals in a London park, than between the trees in our beautiful Leicestershire woodland.

The Treehouse, our only other stage, played host to Deep House, Electro, and on Sunday dived into PsyTrance. We decided to close “The Noisily Stage” on Sunday as there weren’t enough people there, and moved the programmed artists to the bar in the middle of the site, where the Pagoda sits now.

One of the funniest moments of the weekend was announcing we were ready to open the gates to the public, and realising we hadn’t made a gate. We quickly threw a table, chair and gazebo on a quad bike and hair tailed up to a fence next to the car park, removing a section, and sat our newly appointed ticketing officer Fi there for what turned into a 15 hour shift. We are forever indebted to her for that!

One of the not so funny moments of that weekend was fending off a gang of 30+ thieves who had heard about this new festival online, and came to make the most of our presumably bad security. Fortunately we were able to personally chase them down on multiple occasions across site, and thwarted their efforts to pilfer.

The Police came and one of the gang punched an officer in the face, was incarcerated for the night, and when released the following day stole a car in Market Harborough, drove onto site damaging a number of cars in the car park, and then fled into the woods on foot. So as the final beats of PsyTrance echoed through the canopy at The Treehouse, and the sound of a Police helicopter reverberated above, we patted ourselves on the back for a job well done.

In the years that followed we came up against an array of challenges that small independent festivals inevitably do: How do we fund this without corporate sponsorship? What is our identity? Who is our crowd? How do we sell more tickets? Trying to remain objective and polite when a keyboard warrior comments about something we may have missed or got wrong, talking to our small, passionate and dedicated team like they’re some big, evil entity or shit on their shoe? Not killing each other when the stress and fatigue got too much on site? Techno or PsyTrance…? The list goes on…

We’ve overcome so many of these challenges, continue to struggle with others, and naturally more keep popping up as we move forward. Whilst we don’t necessarily relish all of them, there is a passion within the core team that eclipses these difficulties, which ultimately boils down to an acute understanding of our ethos, and what it is we are trying to create in the Coney Woods, and inspire beyond them.

Noisily is a festival that celebrates the individual, cultivates understanding in the collective, and explores what it means to be human in today’s World.

Grounded in 5 core pillars, we strive to stand on the edge of knowledge, to share that knowledge and information with the intelligent, open minded people who come to the Coney Woods each July and join our festival family.