Ten Fantastical Things you HAVE to see at Noisily!

Yesterday we sat down to think of our ‘Top Ten’ recommendations for the festival this year, but after lengthy discussion we came a cropper, because as soon as we landed on one thing we thought you all absolutely couldn’t miss, ten other things came to mind.

So we decided to forgo the ‘Top Ten’ terminology, and elected instead to simply make a list of some of the wonderment that’s on offer in the Coney Woods this July…

WOMB 2 (Women of Music Business) – Changing the Face of the Industry One Set at a Time. London based DJ Lucid Stannard is making waves in the industry as she and her collective of female, female-identifying and non-binary artists pave the way toward a time when gender has no implication on whether you are booked to play. In disrupting a historically male dominated industry, they are shifting the paradigm and perception of female, FI and NB artists away from tokenism and gimmickry, toward a future level playing field.

Lucid and her collective are taking over our all new stage the Parliament of Funk on Sunday at Noisily this year, laying down a soulful mix of Disco, RnB, Funk, House and Techno. To read more about Gender Equality in the Festival Industry, or the lack thereof, read our recent news piece here and learn more about our pledge to join the revolution. 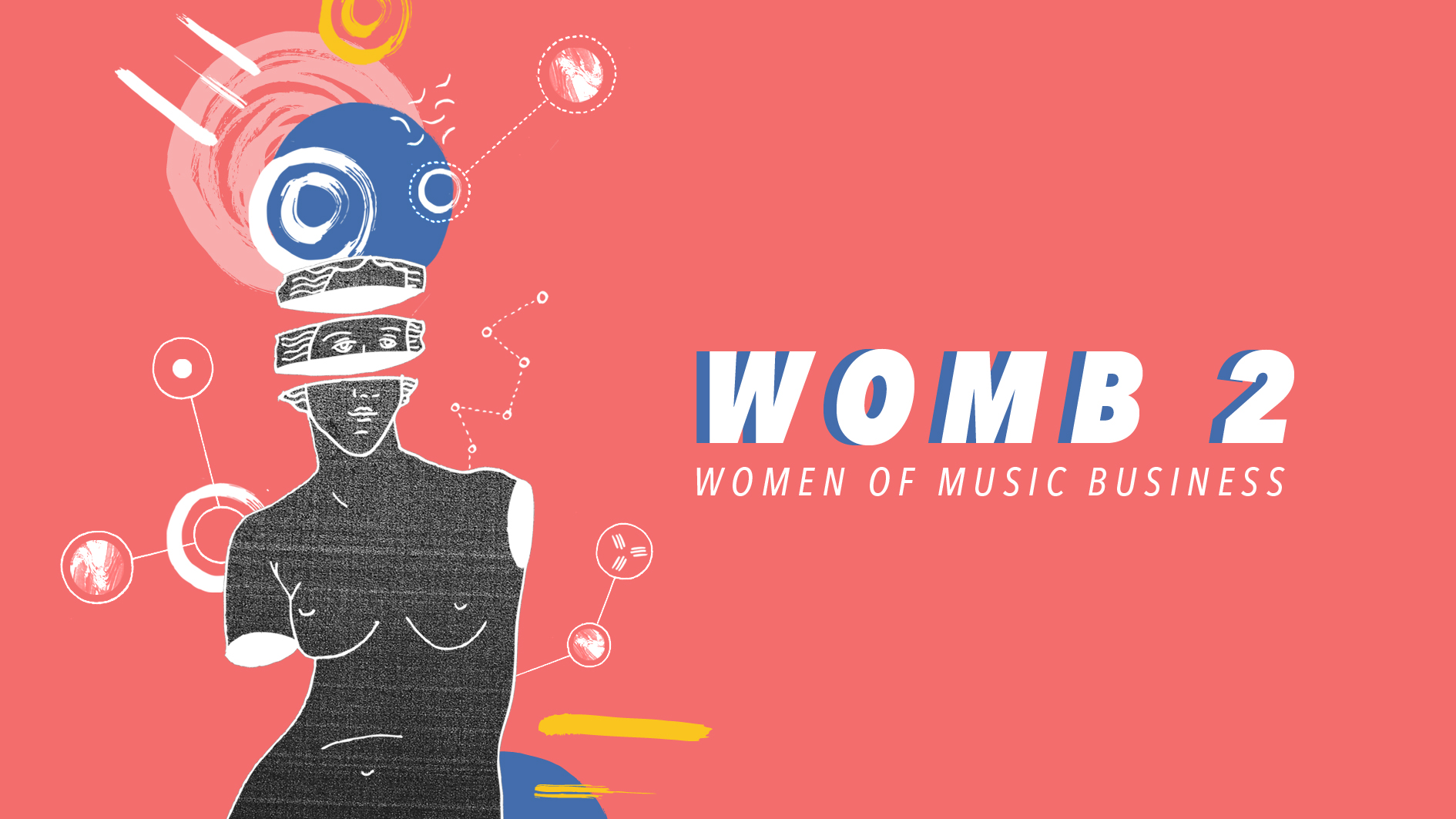 Home Grown Talent – At Noisily we love to bring in mesmerising music for our dancefloors, and often this comes from far flung corners of the globe. However here in the UK, the birthplace of rave culture, we’re not short of industry defining acts who have shaped the very make up of the global soundscape. This year is no exception, as we welcome Bass Music Monoliths Stanton Warriors, DnB legends Roni Size and Logistics, and Trance heavy weight Tristan into the mix.

But if your not over 40, fear not, we’ve got a plethora of underground up and coming Best-of-British talent for your listening pleasure! On the Noisily Stage the Liverpudlian Avrosse will be breaking boundaries and shattering ear drums with his epic melange of bass heavy Techno, taking over from Aidan Doherty and his London based club night collective Warm Up, who’ll be well and truly warming up the woods. Other names worth watching include Crystal Palace’s Ben Coda, legend John 00 Fleming, and Brixton boy Colebrooke who’s Techno is emerging after several years at the heart of one of the world’s top Psy Trance double acts, Flip Flop.

On The Treehouse Stage we represent home shores and local talent, with blistering sets from JFB – back for more after his knockout scratch session in 2017. From DnB hotshot Ed Solo, a man who, like Bob Dylan, seemingly never stops touring, and who played the first iteration of the Noisily Stage in 2012. To top it off Shogun Audio’s Joe Ford returns after a two year hiatus, playing a matter of minutes after Brighton’s own Oli Cash, aka Far Too Loud.

The Liquid Stage returns galloping into the woods, with a cacophony of British Psychedelia to keep your legs thrusting and arms-a-flailing throughout the weekend. UK label Furthur Progressions will be represented by Prog Boffin Multiphase (sandwiched between Perfect Stranger and Symbolic), Mark “The Bedford Rascal” Bedders, the funny man behind the In Bits Podcast which you can find on Soundcloud, as recorded with Mancunian Allaby, also spinning the wheels this year. Last but not least label boss DJ Hamish will be taking the helm, albeit on the Noisily Stage for a rare Techno outing!

For fans of Full On, your thirst will be slaked by 4D, Killerwatts, Darshan, Avalon,Tristan, Fagins Reject, Aardvark, Hypnocoustics and Liquid’s own Liquid Ross. So as you can see/hear, the audio roots in Coney Woods are well and truly steeped in the loins of Blighty, even if we are, of course, all citizens of the World!

Alongside our festival flagships, we have two stages that kick off in more intimate but equally epic ways – The Leisure Centre and the all new Parliament of Funk, curated and hosted by friends of the festival to provide transient and vibrous elatory moments of happiness. Check out our line up pages here.

We are Noisily Festival of Music AND Arts, and thanks to our Art Director Ruth Herbert and her astonishing eye for detail, intimate knowledge of the festival site, and extended network of creative geniuses, the Coney Woods are adorned with splendour beyond our wildest dreams, and yours, every year.

An interactive art installation design, built and created by Kira Zhigalina, Adrey Novikov and Adrian Godwin – Symbiosis is an interactive biofeedback installation. Using sensors, the participants’ breathing is visualised in moving LED lights. Having the capacity of 8 active participators, the LED filled dome is an immersive magical environment that people can walk into. Once inside they sit on benches equipped with pressure sensors. The participants are encouraged to use beneficial deep diaphragm breathing. Read more here. 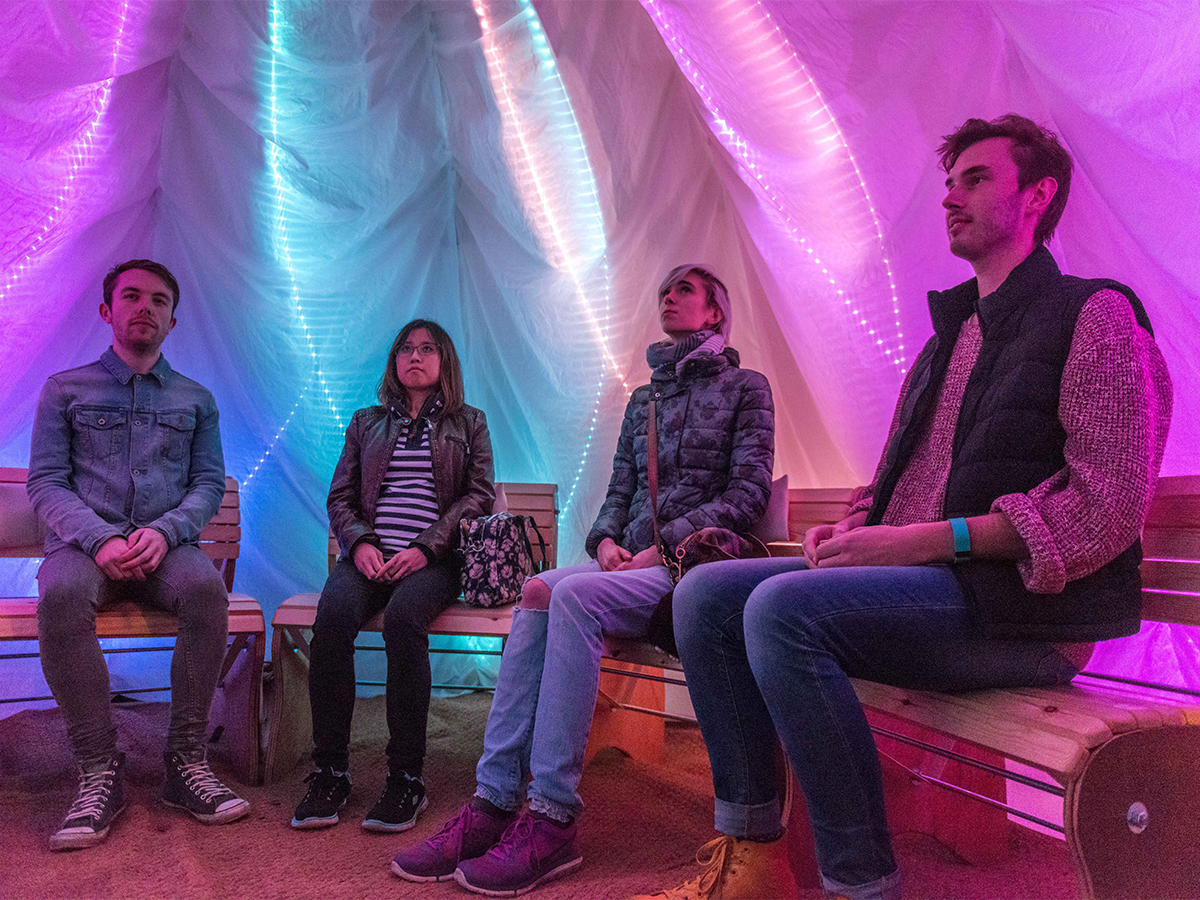 Mandin is a collective of 6 international designers with a rich history in designing psychedelic art across the world. At Noisily 2018 they will be bringing their installation Rebirth. A large egg that people can climb into, made from recycled pallet wood. It is supported by a thick central pole and legs, which are hidden at night to give the illusion that the egg is floating. When immersed within the psychedelic interior of the egg, visitors will be isolated from the outside environment and given time to chill out, be amazed and contemplate. The interior will fit an intimate 5-6 people. Read more here. 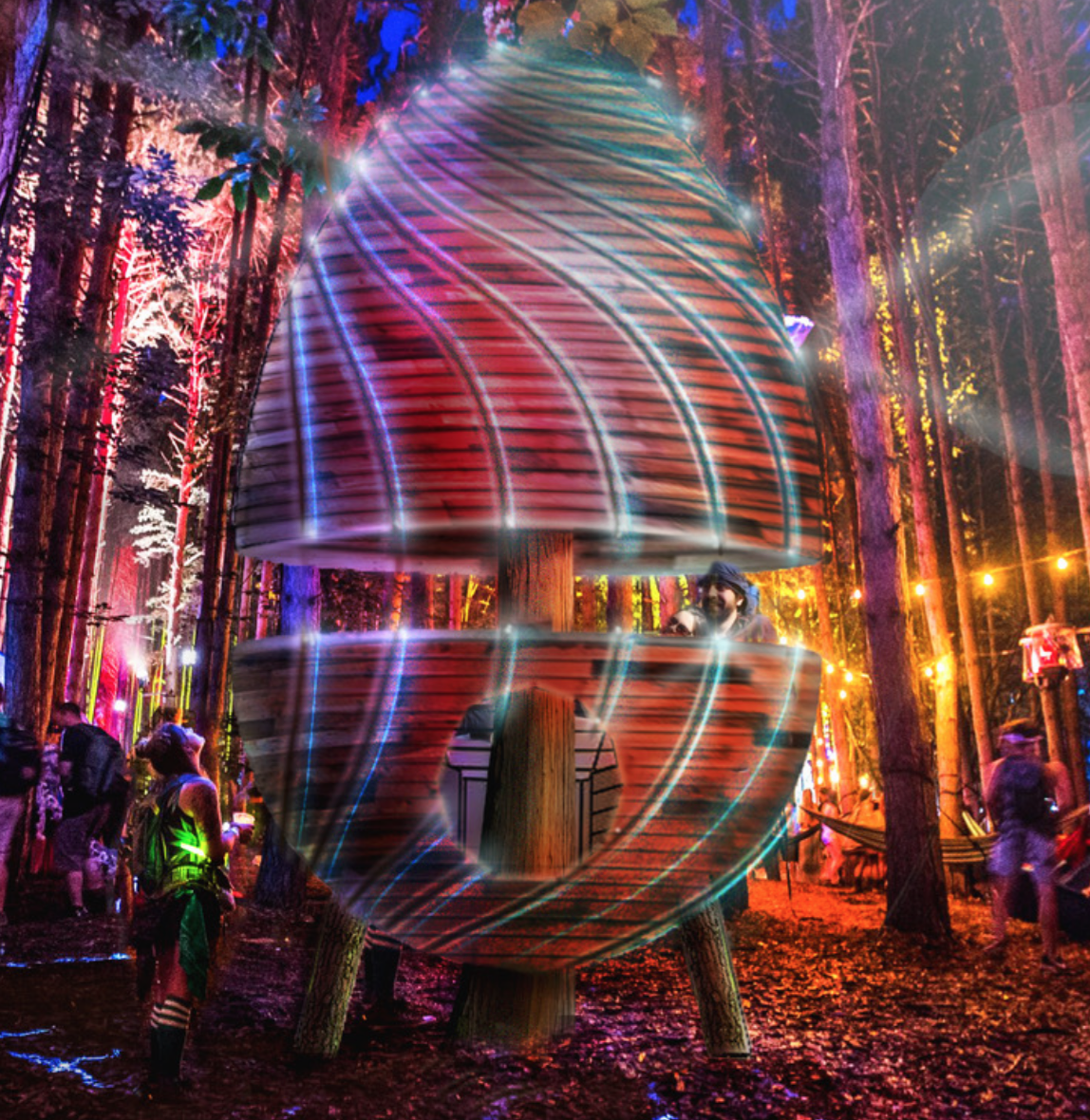 The Fortress – Where art meets wood. One of our master chippies, the affectionately known “Nailgun Steve”, came to us with a creative idea we could refuse – to build a huge fortress over the bridge near the Liquid Stage! After reclaiming several tonnes of slab wood, Steve and his entourage went down betwixt the trees to camp out and build fortifications for all those battle weary ravers amongst you to retreat to when the bass lines have overwhelmed!

A festival in itself, the third iteration of our healing area sees the development of areas specific to Mind, Body and Soul.

Mind – Ronan Harrington: Why Spirituality is the Key to a More Visionary Politics: Our system has reached crisis point but still staggers on as normal. This calls for the creation of deeper cultural spaces and stories that can help us awaken from our dominant system and participate in a regenerative vision of self and society. In this talk, Alter Ego Founder Ronan Harrington, shares his experience building a global network of social change makers that are mainstreaming a more conscious culture and visionary politics.

Body – Three years ago Flo Cannon founded Noisily’s Mind Body Soul area, leaving the ranks last year to pursue her passion for yoga, handing over the space to the capable hands of Noisily co-founder Lachie Gordon. Flo will be teaching two classes at Noisily this year, one of which is inspired by Embodied Flow. Embodied Flow​ is an evolved and transformational style of yoga which was founded in 2013. It is a continuum of movement and mind body connection integrating the discoveries of hatha, tantra and somatic movement systems, which invites you to experience your deepest sense of self, the felt sense, with ease and clarity. This is meditation in action expanding awareness of your entire mind, body and soul. All levels welcome – book your tickets here.

Delver into the realms of Conscious Dreaming and Oneirogens (dreaming plants). Facilitated by London based Dreaming Guide and Death Doula, Tree Carr, you will learn about the wide range of dreams we experience and how to engage with them for the exploration of your consciousness, creative expression, soul growth, problem solving and self healing. Tree will guide dreamers through a Conscious Dreaming Practice that can be taken away and implemented into your daily life. Useful tools for the budding spiritual cosmonaut if ever we’ve heard!

Check out our full Mind Body Soul line up for the huge variety of wonderment we have on offer, including our Hot Tub Stage which not only includes a sumptuous soak and glass Prosecco, but a hoard of DJ’s as well! Saturday and Sunday banquets, massage therapy, gong baths, sonic enchantment, tarot, the list goes on, and on, and on! 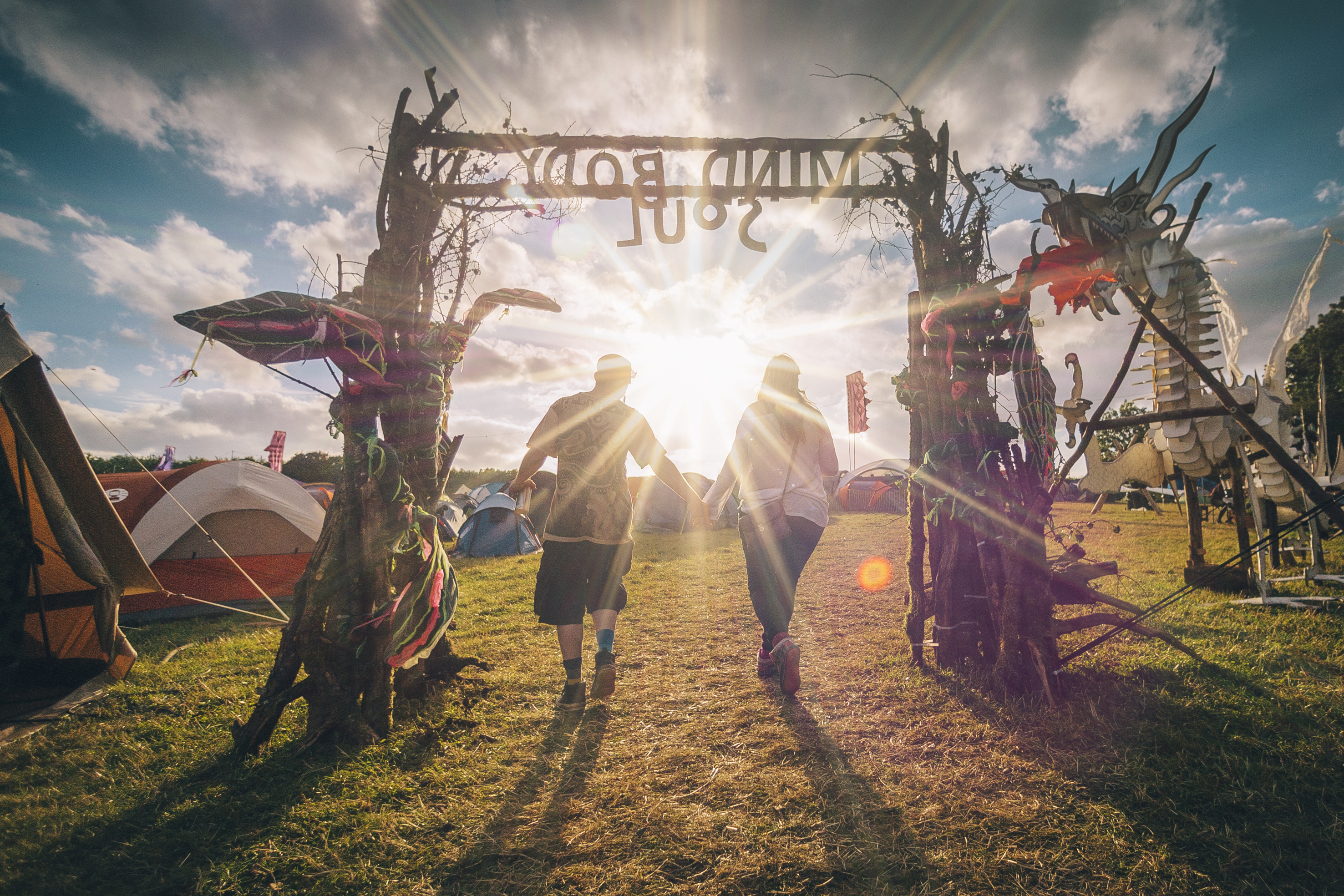 The Foolish Rogues return to Noisily for another year of woodland mayhem, and this year their coming with a troupe over 100 strong, and an all new stage and aerial installation with a complete program of performance throughout the weekend which will happen smack bang in the middle of site. Roo Jenkyn-Jones, the mastermind and chief coordinator has taken time from an astonishingly busy schedule touring the world with a number of stage shows, to come back to his spiritual / literal home in Leicestershire, and craft a show the likes of which you’ve never seen.

Although these aren’t two things you usually put together, at least we hope not… One certainly does induce the other! With that in mind, we have a broader and more delicious smorgasbord of delectable delights that ever before, including a considerably extended offering of vegan and vegetarian food in both the main site and Mind Body Soul.

Now to the poo part! We have traded in our blue plastic porta potties for site wide composting toilets from the splediferous Pootopia! So when it comes to passing a few hours after lunch, or a few minutes after you wake up, you can do so knowing your being kind to the environment and without the smell of chemicals wafting up your nostrils! What’s not to like!

PrevPreviousWin a DJ set at Noisily 2018!
NextTen Things to do in our Mind Body Soul Healing AreaNext