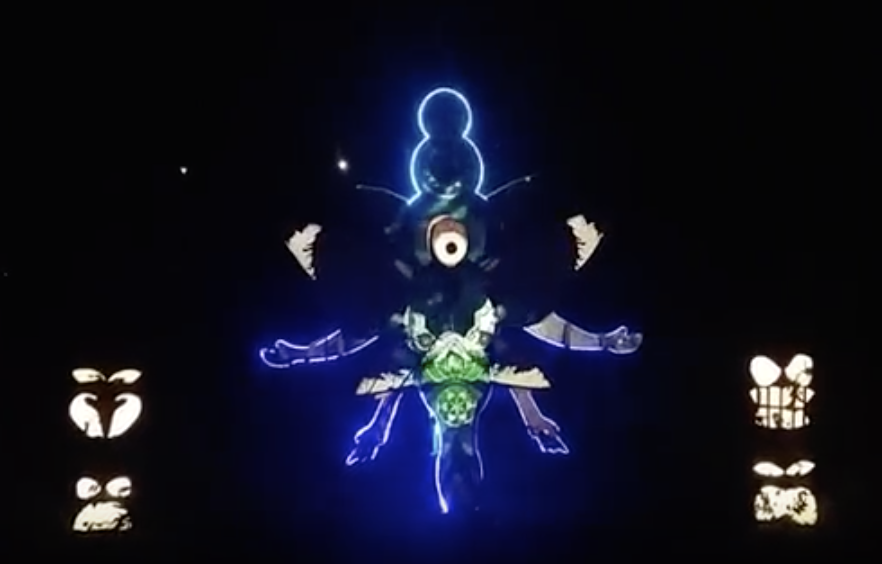 Art is an integral and essential part of making Noisily what it is, and it goes far beyond the cosmetic aesthetic of the festival, running through the core of everything we consider and create. From the musical programming and weekend’s flow, through the healing area and traders, all the way down to the way we develop our operations and logistics throughout the year.

With the 2018 applications officially open (LINK HERE), we are looking back to 2017’s festival to reflect on the wonders of the woods, and for inspiration for next year. Herein is the case study of Joey Baker, his team, and the piece named Yaksha they built for Noisily.

The Piece, The Tech & The Concept

“In Buddhist, Hindu and Jain texts Yaksha’s are a broad class of nature-spirits, usually benevolent, but sometimes mischievous. They are caretakers of Earth’s natural treasures, which are hidden in the roots of trees. Yaksha’s are also said to be guardian angels who communicate through the power of wind.

The design was fabricated from a sketch I completed high in the Himalayan mountains of Kullu Valley, it was a homage to the care and hospitality I received from the Indian people when travelling last year.

It was constructed using 5 layers of plywood, each was CNC routed and engraved with images I layered on photoshop and sent to my team member Beau to fabricate in his workshop. It was cut out using a programme called Rhino which created a jigsaw puzzle effect for all the pieces to interlock. We screwed all the pieces together once on site, aided by interlocking joints around Yaksha, to support the installation during construction.

The wings were created by laminating white canvas onto boards of plywood, providing a canvas for the projections, we then mitred the bamboo around the wings for effect.

After the piece was assembled on the ground it was painted and varnished in glossy medium to give the installation more shine to reflect the light. Little details like coconuts were added to give it more dimension, this also linked with coconut rope we wrapped around the arms.

These materials were nostalgic to me personally. From building in India the year before to the woodland floors of Leicestershire, and it has since become a favourite medium of mine which I accredit to its rawness.

After the piece was painted we erected the installation onto two scaffold poles, once complete it was down to video mapper Harvey McGarry to align the 3500 Lumen projector from a nearby tree with the installation. Whilst working from the back of a van outside the liquid stage, Harvey was able to map out the piece using footage he created on video mapper and Adobe After Effects.”

What made you want to bring an art installation to Noisily Festival?

The first time I came to Noisily festival in 2016 I was painting at the art gallery, I knew it was special, a festival which put a huge amount of effort into its decor, making the site look as incredible as they could. The art exhibited at Noisily I had been a fan of since I was a teenager, and putting in the extra effort was something I resonated with and I knew I wanted to work with them in the future.

My main skill is as a painter, but I had reached a point in my career where I felt inspired to experiment with other mediums, expanding my skill set and experience. I have always had incredibly talented friends, and getting people together to expand their abilities and create is one of my favourite things to be a part of, so the main premise was to test our imaginations as artists, to play and create magic.

Noisily’s art grant funding was something which made this a possibility.

Which was your favourite installation at the festival?

My favourite piece was a sound installation named Illumaphonium, designed by artist Michael Davis in 2017. It was located in the bushes near the Liquid stage and was a dynamic interactive musical creation. I had many moments of bliss there.

I am naturally most impressed by art which surpasses my own talents, sending me into a little state of awe. In this instance interactive electronic art, music, and grand architectural design.

What made you want to become an artist?

Freedom, to be in control of my own destiny. It also came from not wanting to work for other people and to bring my own mystical visions into reality, to attempt to give others an experience which would in turn inspire them to develop their own abilities.

What inspires you as an artist?

The miracle of existence. Everything from deep inside all the way to the wonderful world around us. Inspiration is the build up of energy inside us all, which manifests in the expression of our magnificent universal experience. My work focuses on showing the beauty within the world and in individuals as an exercise for healing. I am incredibly inspired by symbolic imagery of quasi religious aesthetics, combined with technological symbols, and this is perpetuated with the natural patterns and imagery which occur in everyday life.

Above all I would say travelling is the biggest inspiration. Throwing yourself into new experiences with the desire to be enriched by different cultures, spreading your empathy, and sharing in community. The experiences themselves are a result of our ability to remain present, and existing with this philosophy sheds light into our souls, and as artists, if we are able to create art which mirrors the emotions felt in those instances, they can then be projected onto the viewer.

I believe life is a self fulfilling prophecy. If people are shown how beautiful life is, and how they can express that through art, then they will in turn become that beautiful thing and treat others with respect.

Have you got any exciting projects in the pipeline?

I am always keeping busy with my work, and have a few projects I’m looking forward to. I’ve been setting up an art residency programme called ‘North’ up in Naggar in Himachal Pradesh, Northern India for the last couple of months.

Myself and my team have also been trotting around India building installations at festivals, and have been asked to design a seating area and a installation for Magnetic Fields Festival 2018:

After this we will be putting on a group exhibition in Naggar Castle for Christmas, showcasing ‘North’ artists before hitting up wall murals around Rajasthan. After that we will be travelling, working with various artists and events around Goa with dance companies and stage decor teams.

I will also be travelling to Auroville in February, an eco township and self-sufficient micro society on the East India coastline, to help set up their new artist residency programme.

After that, a summer in and around Europe creating art at festivals and events.

What was the best thing about creating this piece of art?

The best thing about creating this piece was spending time with friends doing what we all love, and watching a sketch turn into a mystical piece of art in front of our very eyes.

What was the biggest challenge you faced when making this installation?

The biggest challenge was working out how to construct the wings. There was a lot of pre-production that went into the piece so it was a really smooth build. However we had initially intended to bend the bamboo around the wings rather than route it, but due to lack of time we didn’t couldn’t steam and bend the bamboo. This lead to a few hours of thought and head scratching, but we like challenges and chose to mitre the bamboo instead.

What advice would you give to someone who is applying to bring an art installation to Noisily Festival?

The most important thing is your team. They are everything, make sure your team works well together under stress, and try to employ multi talented artists who when combined, have skill sets that cover all the bases.

Pre-fabricating before festivals also puts you at a massive advantage. Try to cover a lot of ground in pre-production to make life easier on site, as sometimes things can be chaotic such as collating materials, tools not being present, and things generally going wrong. A good team should think of all possible mistakes and problems before they happen so that solutions can be preempted.